How to Fix IRQL_NOT_LESS_OR_EQUAL Errors in Windows 10 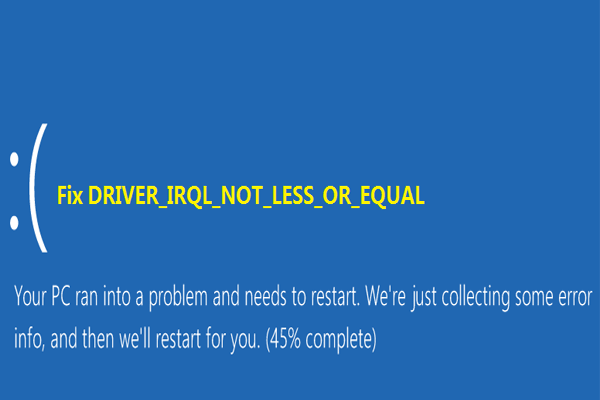 Windows 10 is a great operating system, but it does have its problems. One of the most common Windows 10 errors is an IRQL_NOT_LESS_OR EQUAL error. This type of Windows 10 error can be very frustrating to deal with because you are left without any clue as to what caused the problem.

If you are getting this error message, it means that your computer has a hardware problem. This could be due to a faulty hard drive or memory. In some cases, the issue may be with the motherboard itself.

This is the most common error experienced by Windows users, and it can be frustrating when it appears out of nowhere. But don’t worry! There are several ways you can fix this issue quickly and easily without spending a fortune at the repair shop or calling IT support for help.

Plus, if you want to learn more about what causes these errors, how they affect your system, and how you can resolve them yourself, then keep reading!

Our step-by-step instructions will walk you through everything, so there’s no need for guesswork or trial and error – follow along until the problem is fixed! It’s really easy once you know precisely what steps to take.

What Happens When the IRQL_NOT_LESS_OR_EQUAL Error Occurs?

The IRQL_NOT_LESS_OR_EQUAL blue screen of death error occurs when a kernel-mode program or driver attempts to access a memory address without proper access rights. This can be caused by software bugs, hardware malfunctions, and even certain types of malware.

If this happens on your computer, it usually means that there’s something wrong with the system files in Windows. You might need to reinstall the operating system or update drivers for some devices.

But if you don’t have time for all that, we recommend using Driver Talent (formerly called DriveTheLife). It will automatically identify and fix any problem drivers on your PC so that you won’t get those pesky blue screens anymore!

Causes of the IRQL_NOT_LESS_OR_EQUAL Error

Memory allocation in Windows is handled by the heap, which is located right below the kernel space. If the data stored on the heap becomes corrupted, you might end up encountering the IRQL_NOT_LESS_OR_EQUAL error. Unfortunately,

There is no way to recover from a corrupted heap unless the memory location containing heap data gets replaced. One of the best ways to prevent such issues is to avoid storing sensitive data on the heap.

The registry stores necessary configuration settings inside various system folders. The registry file gets updated and re-written back into the original folder whenever changes happen to those folders.

The registry contains several critical settings, including user account passwords, network configurations, and other vital information. These settings should be backed up regularly so if something happens, there is a backup available.

They do so by infecting your machine either through a drive-by download or exploiting an existing vulnerability.

Most malware programs target specific vulnerabilities in Windows, so if you don’t have a good anti-virus system installed, you could get infected quite easily.

Many tools can detect and remove malware, but sometimes, the damage may already be done even after removing the virus.

Hardware failure refers to any component inside your PC that has experienced a malfunction. Examples include failed hard drives, overheating components, faulty power supply, etc.

Even though these parts fail independently, they still affect each other, causing similar symptoms.

For example, if your motherboard fails, it won’t let your CPU cool down enough, leading to overloading conditions. Overloaded CPUs lead to overheating, which eventually leads to more severe hardware failures.

Driver problems typically result from improper installation. A driver is essentially an application that works in conjunction with a piece of hardware. Every device on your PC needs a corresponding driver that tells Windows what kind of action to perform on that particular type of device.

For example, when you plug in a USB stick, Windows automatically loads the correct driver based on its specifications. Without a proper driver, Windows won’t work correctly and instead throws various errors.

User errors refer to anything that happens because someone made a mistake while using their computer, such as installing an incorrect driver or overwriting important files without backing them up first.

For these errors to occur, the user must attempt to use their computer dangerously.

Usually, the IRQs required by the device can be identified under the “Interrupt requests” section inside the device properties window.

Identify If There Are Any Compatible Drivers Installed

Once you have identified the device that causes you the IRQL_NOT_LESS_OR_EQUAL issue, you must find out if the drivers you wish to install are compatible with the device listed above. So now we know which device is causing us the error.

In that case, you might consider looking at other alternatives, such as upgrading your current version of the device driver to a newer version or using another driver entirely.

Please note that even though some manufacturers release free trial versions of their drivers, which you could download and install, they usually contain non-compatible changes that make them incompatible with your particular device.

This means that if you attempt to install the free trial version of the driver and get the error message IRQL_NOT_LESS_OR_EQUAL, you still won’t be able to work with the device anymore.

Check Whether Existing Drivers Are Compatible With New Software

Once you have determined which device requires the installation of a compatible driver, you should take a closer look at the existing driver installed on your PC. Is it compatible with the device you want to install drivers for? Or maybe the device needs a driver with a higher compatibility rating.

It’s essential to determine this because if you try installing a driver for a device that has been working perfectly fine before but suddenly stops working due to an incompatibility issue,

you will waste time troubleshooting the issue instead of going ahead. Also, remember that when you install a new driver, it does not automatically replace the old one.

Therefore, make sure you delete the older driver entirely by following the instructions given below, or else use Add/Remove Programs to uninstall it.

Before proceeding to the next step, you will first need to make sure whether there are any additional drivers present on your PC that are not needed on Windows 8.1 and below since only drivers compatible with those operating system versions can provide support for IRQ related functions.

Here you should be shown a list of your available drivers, so scroll down until you reach the bottom of the list. From here, you can unselect unnecessary entries and remove them.

However, it’s always better to proceed with caution because removing a driver while trying to access its properties could lead to data loss.

Go Ahead And Install The New Driver

If you followed all the tips we gave in the previous paragraph correctly, there shouldn’t be any reason why the installation of the new driver cannot succeed. But if you encounter the IRQL_NOT_LESS_OR_EQUAL error again, something likely went wrong during the process.

This can occur if the driver you tried to install doesn’t meet minimum requirements or if the installer failed while configuring the driver for your Windows OS.

When faced with a problem, it isn’t always necessary to call tech support. You may be able to recover the data yourself by taking a few simple precautions. Back up your files frequently, keep a full installation disc handy and try not to make too many mistakes at once.