C language Vs Java: Which Programming Language Is The Best 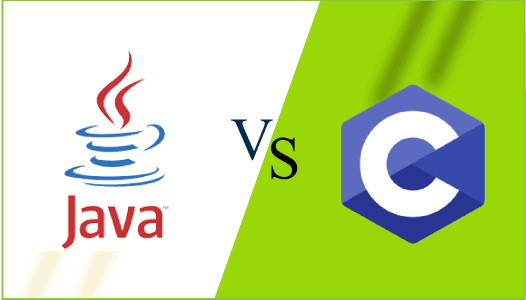 C language is procedural, low level, and compiled, while Java is an object-oriented, high-level, interpreted language.

C uses functions whereas Java uses objects. Also, Java is a lot easier to learn and implement than C, which of course, performs faster due to machine codes.

Considering these features, whenever someone asks which language is better – Java or C? We ask, “What are you looking for in a programming language?”

Because both Java and C are the oldest, most sought-after programming languages worldwide.

So, the better question should be “what are the differences between Java and C?” to find out what may work for your project.

Differences between C language And Java:

Both C and Java have paved the way for people to think about coding in general and learn web development processes.

C being the oldest language was primarily developed to serve as the foundation of other programming languages like Python, C++, C#, and so on. Java, on the other hand, is the most diverse and famous language.

Thanks to its plethora of features and robustness, most coding enthusiasts today seek interest in learning Java development services to improvise their coding skills and understanding in web/mobile app development.

What is C Language?

As discussed, C is the oldest general-purpose programming language of all time.

Developed at Bell Labs by Dennis Ritchie in the year 1972-1973, C helped IT enthusiasts build utilities running on Unix and was later used to re-implement the Kernel of the Unix operating system.

C is also referred to as the middle-level language as it combines the features of both high-level and low-level programming languages.

Some of the amazing features of the C language include:

1. It is extremely easy to learn.

2. An efficient programming language that is also fast with an enhanced performance rate.

3. A highly portable and extensible programming language with no hardware tied

4. Any code is written can run on any machine that supports C without any further modification needed.

5. Has a rich set of built-in operators and libraries with functions

6. It is modular and statically typed.

Developed by James Gosling at Sun Microsystems, and later acquired by Oracle, Java is one of the most diverse programming languages of all time.

It is the most trusted language of hundreds of software companies and developers worldwide to build software applications that solve real-world problems.

In simple words, Java code can run on all platforms supporting Java without any recompilation needed. Additionally, it supports a plethora of features to enhance the developer’s ability to develop highly scalable applications.

It also has a wide range of frameworks built like Spring, Dagger, and more that help developers work seamlessly and quickly.

Some of the amazing features of Java include:

2. It is purely an Object-oriented programming language, which means the Java codes are written in the form of classes and objects.

3. Being a multithreaded language with automatic memory management, it offers great features for garbage collection and distributed computing.

4. It is dynamic and extensible.

5. It is secure and robust.

Java or C language – which one to choose?

Lastly, to answer which programming language is the best, one needs to determine their use cases.

If you are looking for a language that offers enhanced performance and is required for a system where high speed and performance are paramount, it is advisable to choose C over Java.

However, if your use case is of building software products or distributed systems, Java is your go-to solution. It offers rich libraries and numerous benefits to make feature-rich apps.

So, between Java Vs C language, the use case wins. Depending on your project goals and app requirements, developers may suggest a suitable programming language.

If you are still confused about which programming language to choose for your app development program, get in touch with our experts.

Our professionals will help you get in-depth guidance on all the languages and their features to ease your decision-making process. Connect with our team to learn more about C and Java development services.

Shivnandan is a writer and designer who loves creativity and enjoys experimenting with various web trends.

He is extremely fond of anything related to designing, creativity, art, and all the yumminess attached to it. He believes in doing everything with a smile.