Difference Between 1ms vs 4ms Response Time Based On Various Factors 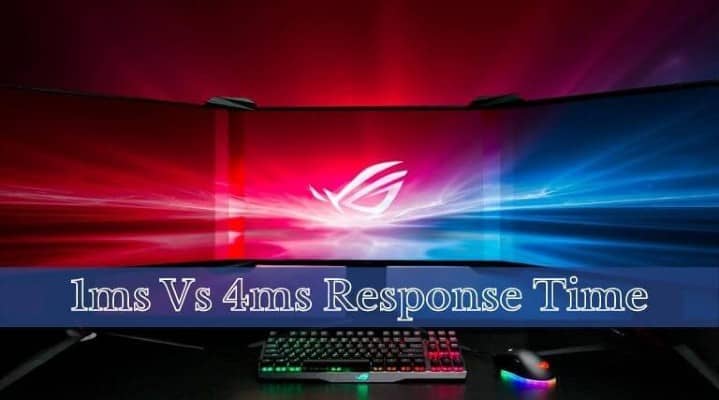 Are you a gamer? Do you want to know which response time is better for gaming?

The average human reaction time is 0.25 seconds, so if your monitor has a 4ms response time, it means that the pixels on your screen are refreshing every four milliseconds.

If your monitor has a 1ms response time, then the pixels on your screen are refreshing every millisecond. Which one should you choose? Let’s find out!

A 1ms response rate will give you an edge in competitive games like Overwatch and Counterstrike because it reduces motion blur and ghosting effects when fast-moving objects appear on the screen.

However, this comes at a cost as monitors with faster refresh rates tend to be more expensive than their counterparts with slower ones.

So if the price is not an issue for you, we recommend going with 1 ms over 4 ms any day of the week! But if the budget is tight, then don’t worry.

There are still plenty of great options available even though they have slower response times, such as 2-4 ms range which can still provide excellent performance while saving money at the same time!

Plus, these monitors usually come equipped with other features such as FreeSync technology that help increase overall display quality and responsiveness by synchronizing frame rates between graphics cards and displays, reducing input lag.

Let’s have a side-by-side comparison between these 2 response times.

What Does Response Time Mean For Gaming?

Before we dive any deeper, let’s quickly go over the basics of what “response time” means. A monitor’s response time refers to its ability to display changes instantly onscreen as they happen.

While there are different ways to measure response time, the most common method used by gamers is by testing monitors using a strobe light. The lower the value, the better:

The goal always seems to be around 0.5 ms.

Achieving this level of performance is problematic for two reasons. It requires exact timing and a high-quality signal to create the images onscreen.

So, even though the ideal may seem low, achieving it in practice is almost impossible. That said, you don’t want to wait too long between when you make changes to what’s happening onscreen until the image displays.

If that happens, the change would feel unnatural because the human eye takes longer than 1/100th of a second to process what it just saw.

Comparison between 1ms vs. 4ms response time based on various factors

What is 1ms and 4ms gaming response time?

1ms means that your monitor has a 1 millisecond response time which means that it can switch between colors quickly without any ghosting or blurring.

4ms means that your monitor has a 4 millisecond response time which means there might be some ghosting or blurring when switching between colors on this monitor. So why would anyone want anything other than 1ms?

A combination of both these technologies helps make sure that pixels change from one color to another as smoothly as possible without any ghosting or streaking.

The faster the pixel transition speed, the more responsive your display will be when performing tasks like gaming or watching movies with lots of action scenes.

And while most monitors have an advertised response time, only those with overdrive technology can improve their actual performance by speeding up their transitions even further through software processing.

which is where our 1ms and 4ms displays come into play! Our 1ms displays use advanced overdrive technology called AMA (Advanced Motion Accelerator).

which speeds up transitions between colors onscreen by about 30%. Meanwhile, our 4ms displays use NVIDIA G-Sync adaptive refresh rate technology.

They dynamically adjust themselves within a range of 35-120Hz depending on what’s happening onscreen at any given moment so that they can provide a smoother and more fluid gaming experience!

With a 1ms response time, gamers will notice that their games are much smoother than with a 4ms response time. This means that there is less lag when playing games on an HDTV or monitor.

The lower the number of milliseconds (1-4), the faster it responds to changes in images on the screen. This makes for a much smoother gameplay experience overall.

So if you’re looking for an edge over your opponents, then this might be just what you need!

Why Is Having Faster Response Time Better Than Using High-End Monitors?

Now that you know what response time means let’s jump straight into the benefits of having a higher number.

One thing that sets top-tier monitors apart from other models is their fantastic brightness and color accuracy.

When we talk about response time, we aren’t talking about pixel density or anything like that. Instead, we’re looking for the fastest way to show the latest frame being rendered by a game.

Higher refresh rates give us less reason to worry about the lag between updates since everything onscreen is updated in real-time.

In general, a good rule of thumb is that the lower the refresh rate, the smoother and flicker-free the image gets.

You may see certain games run at 60 fps yet still suffer from noticeable stuttery moments due to the response time.

However, a 120hz monitor doesn’t typically have these issues. And while 120Hz isn’t as important compared to 120Hz+, you do get additional frames per second at this higher frequency.

This leads to one last point: Higher-resolution screens are going to look sharper than lower-res ones. But they won’t necessarily have lower response times.

There are many differences between 1ms and 4ms gaming response times. The biggest one is that a lower number means faster speeds.

so if you’re looking for the best speed possible, go with a monitor with a 1 ms response time.

However, if you don’t mind sacrificing some speed to get better colors and contrast, then choose a monitor with a 4 ms response time instead.

1ms response speed isn’t anything special unless you’re playing games where the difference between 1ms and 4ms significantly impacts gameplay.

In that case, 4ms is much faster than 1ms and allows you to play at higher FPS rates. But even if you only care about the FPS rate, there are a few other reasons to choose 4ms gaming response time.

For example, 4ms gives you a smoother frame rate and less stutter during intense moments in games.