Benefits of a light curtain in the workplace 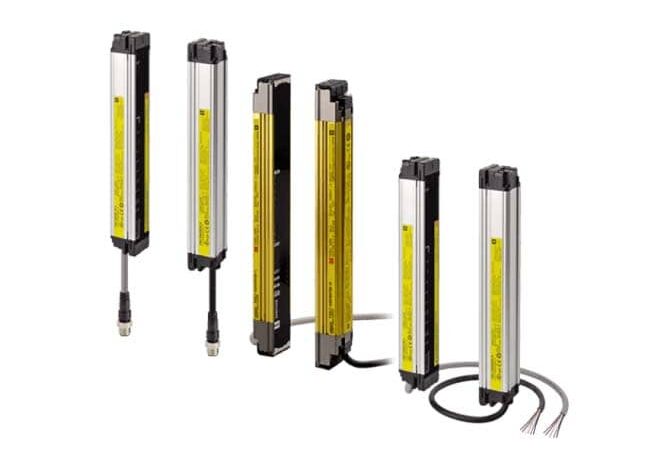 A light curtain is an ideal way to safeguard access areas and danger zones. It is specifically designed in accordance with international standards to prevent accidents.

A light curtain contains two units – a transmitter and a receiver – that are optically synchronized with coded infrared beams. It emits infrared beams, which are controlled and monitored by a microprocessor.

If any of the beams are interrupted, the light curtain output changes to low, and any hazardous movement is stopped.

How does a light curtain work?

The protective field of a light curtain is the area confined within these two components, with the light beams forming an invisible, but permanent shield between the units.

The receiver is connected to a safety relay, which transmits the signals to the machine control unit.

The transmitter and receiver are optically synchronized. This system does not need any wired connection between the two units.

Upon installation, the protective device detects any movement in the hazardous area, triggering a safe response of pause or complete stop, thereby eliminating the hazard.

The device has a permanent self-control function that detects any internal fault. In such a scenario it reacts the same way as an intrusion into the protective field.

The extent of any protective field depends on the dimension of the active optoelectronic protective device, and the distance between the transmitter and receiver units.

Such devices are commonly used as sensors in industrial automation operations where there aren’t any critical human safety issues. In the case of people’s safety, the design and installation of the device are strictly regulated.

Advantages of a Light Curtain

The unique operating principle of a light curtain offers several advantages over most other mechanical safeguarding devices. Some of the advantages are:

1. Reduced access time to the machine, resulting in increased productivity

3. Doesn’t need a lot of space for installation or operation

5. Offers protection to anyone approaching the field

Positioning the light curtains for Safety

The level of safety offered by a light curtain depends on the positioning of the device. It is better to undertake a risk assessment to decide the optimal position suited to prevent any foreseeable hazards.

Special care should be given to ensuring that the positioning will not lead to bypassing the security measures of the device. Any hazardous movements should be safely stopped before any harm occurs.

There are different classical ways to position a light curtain. They can be positioned:

3. In an L shape or a combination of vertical and horizontal positions

You must ensure that there is no chance to pass over, below, around, or behind the protective field while positioning the light curtain.

Likewise, it should not be possible to pass over the highest beams or below the lowest beam and of course, between the two beams. In case one curtain is not sufficient, you should go for additional curtains to ensure safety.

RS Components has a range of light curtains. If you are looking for high-quality light curtains at affordable prices, head to their website.